“No to deportation of immigrants” 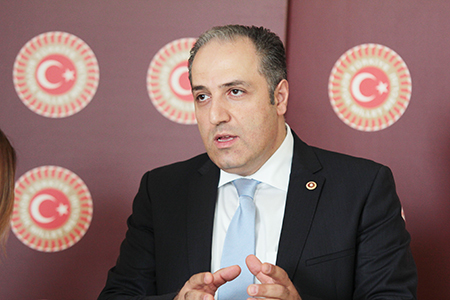 The initiative that aims to deport foreigners and immigrants out of the country will be put to the public vote on the 28th of February. Providing that the initiative is adopted, the foreigners in the country can be expelled from the country under a minor offence without an appeal and will not be allowed to return under any circumstances in the next 5 to 15 years. The head of the Committee on Human Rights Inquiry of the Grand National Assembly of Turkey, İstanbul MP Mustafa Yeneroglu evaluated the matter by stating “I believe that the Swiss public will choose not to adopt this initiative that is incompatible with the fundamental rights, which is situated in Switzerland’s constitution, as well as many international conventions, including the European Convention on Human Rights. Thus I believe that Switzerland, who hosts many international organisations such as the United Nations will reason with human rights, the rule of law and democracy.”

Yeneroglu further stated “the initiative that will be put to the public vote on the 28th of February 2016 is an issue that directly involves Turkish citizens along with more than 2 million other country citizens that live in the country. If this initiative, which means the expansion of the scope and hardening the deportation initiative referendum that was voted in 2010, will be adopted, it will harm the multicultural society, democracy and state of law of Switzerland.

The Federal Parliament of Switzerland and the government state that the initiative contradicts many international conventions. Both the European Convention on Human Rights and Free Movement of People Switzerland – EU/EFTA deem deportation if the person/s who commit crimes that are a threat to the public order and/or state security, are found guilty. On the other hand, according to international treaties, measures are predominantly granted in expulsion and extradition cases in order to prevent the removal of the migrant/applicant to a country where he/she may be subjected to violent treatment such as torture, dehumanising or other inhumane treatments. Laws on prohibition of deportation is clearly stated in the United Nation’s Convention against Torture and Other Cruel, Inhuman or Degrading Treatment or Punishment, UN International Covenant on Civil and Political Rights, The 1951 Refugee Convention, and also UN Convention on the Rights of a Child. Thus, deportation that is not based on the above conventions can be considered as discrimination on foreigners.

The issues in the initiative that will be put to public vote this month is not limited to the contexts of international laws. The adoption of the initiative will directly act on the right to respect for one’s “private and family life, his home and his correspondence, as stated in Article 8 of the European Convention on Human Rights. Furthermore, the adoption of this initiative will cause Switzerland to constantly and regularly violate the European Convention on Human Rights and increase the risk of Switzerland terminating the European Convention on Human Rights system in the long term. Likewise, forbidding foreigners’ right to appeal within the framework of the initiative neglects the two fundamental principles of international law on human rights, the principle of proportionality and legal case-to-case assessment. The initiative that aims to write a detailed provision to the Federal Constitution means an intervention to the Federal Parliament which has the legislative competence and legislation task according to principle of separation of powers.

The initiative will also cause social issues and will bring with it victimisation, family fragmentation, and loss of people that are part of the Switzerland society. Many second and third generation foreigners who were born and grew up in Switzerland will be put in the danger of being sent back to their home countries that they have no social connections with, may have never visited, and worse may be undergoing human rights violations. What is more, the posters that show the white sheep standing on a Swiss flag kick the black sheep over the edge clearly shows that this initiative is prepared with racist and xenophobic motives.

I am certain that Switzerland that host many international organisations like the United Nations that aim for the peace of people and the government will contribute to not damage their international reputation and protect common sense in the context of human rights, rule of law, and democracy. Within this framework I appreciate the counter-inititaive works of esteemed lawyers, politicians and non governmental organisations and invite the citizens of Switzerland to vote NO on the 28th of February.”